After our way to short stay at Medewi point, we returned to busy busy Seminyak. Seminyak is known for its party scene, shops and the beach. The beach is a really long sandy beach that breaks kinda all over. There’s a billion people and a great selection of hipster food places, so it’s very easy for every western person.

We rented a big villa with pool fairly close to the high street, but not so close that we would be troubled my drunken Aussies -sorry, but Seminyak seems to be Aussie equivalent to what Ibiza of 2001 was for Europe…

First day we surfed the beach but it was kinda “meh” and we could only get foamies. So it was, what it was. On day two in Seminyak we went to Uluwatu so Toan could meet the wave of his dreams, and boy did he! Shaun, May and I took the driver and saw Dreamland, Binging Beach and walked around in Uluwatu too. It is a very special place. So lush, so picturesque but also very international -off course! A friend suggested that we’d hire a surf guide and surf Uluwatu, but I feel that it is such a special place, and that that cave, where you enter and exit the water is such a rite of passage, that it should not be passed with a guide. I know it might sound crazy to some, if you get a chance to surf at Uluwatu, take it, but to me I feel like the people who are good enough surfers, should have that magic place to them self. It should not be for everybody. I’ll have to be a better surfer, to dare those waters. I guess it’s a matter of culture… Anyways only Toan went, and I am happy that I didn’t. How ever it left me really surf craved so we went to Canggu and surfed the sun down. Crowded as hell, but I did manage to get up on one or two waves on a 6’8 board. So pleased with that,. Also pleased with finding out, that 6’8 is not big enough for me, if I want to buy something. I need at least a foot longer than my self -so a 7’2.

During the evening home after sun down surf we booked flights and made plans to leave Bali and go to Sumatra!!!

But first there was one more surf spot on my bucket list!
On day three we all, but Toan, felt the surf craving!!! Everybody was desperate and almost itching to get out there. So we got the driver and went to the bespoke Old Mans Beach. Old Mans is longboard heaven! It’s where the famous Deus Nine Foot & Single surf competition is held and epicenter of longboarding meets Cafe Racers with hipster coffee. Awesome longboards were for rent and the waves were looking good. The crowd however was huuuuuge. Off course. So we found our magic vessels and paddled out. 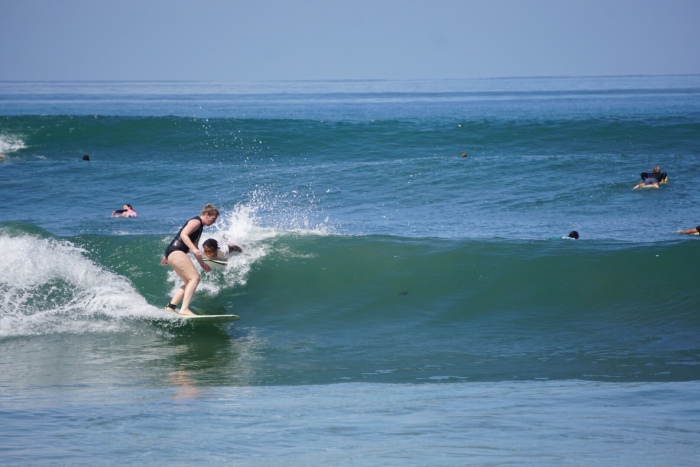 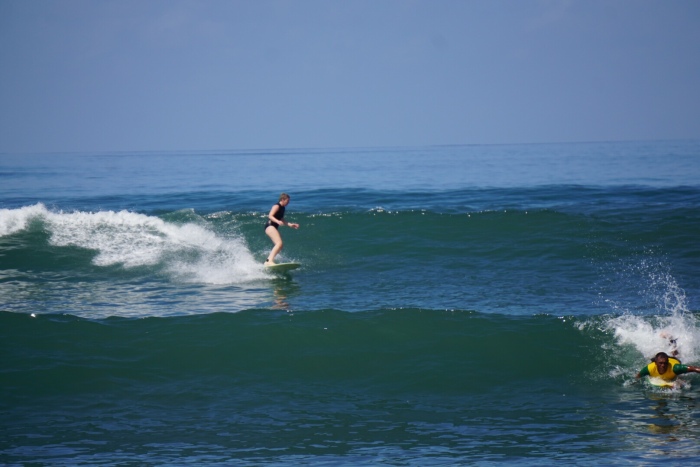 It was hard, and it was magic! I did so good, and I’m so proud of my self. Toan didn’t surf but flew the drone for 30 minutes -where nobody caught a wave. As soon as the drone landed safely on shore, I got the wave. How come it’s always like that?! Anyways he did mannage to snap some photos of me, so thank you -check out his surfblog for awesome footage of our trip and more.

As I was sitting in the water, waiting for an empty wave, some of the instructors started to chat telling me to go for more waves. It’s just so nice when people in the line up are chatting and encourage each other. They really wanted me to have good waves and a good time. I got the feeling that they really wanted me to do well because I was out there one my own and actually could paddle -unlike the people they kept pushing into waves. So at one point one of them told me where to sit, and when to paddle, and I caught it. I surfed it all the way in front of the rock, and had to claim my right and cut in front of a short boarder on the inside. It felt good! It felt good to stand my ground -or stand my wave!
The session ended with a great meal at Deus ex Machina Restaurant, so my Bali experience was completed. Ready to move on from Bali.

Squid Salad at Deus, food is just such a big part of a trip…